If your little ones are to young for dawn service like ours we are celebrating Anzac Day and remembering our Anzacs with some delicious Anzac Biscuits.

Here is a yummy recipe from Donna Hay so you can make some yourself. And if you want our FREE Printable. You can download it here. 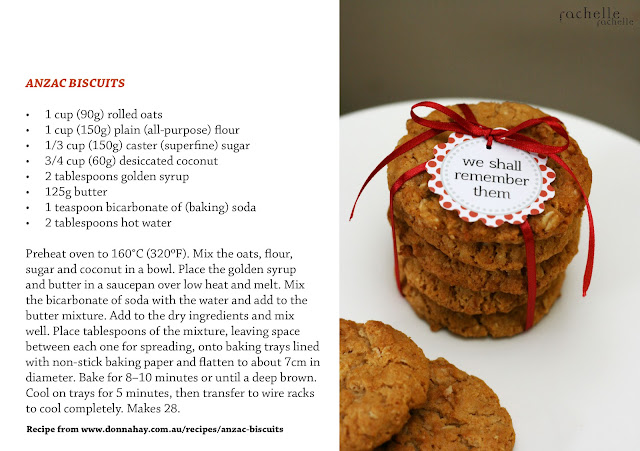 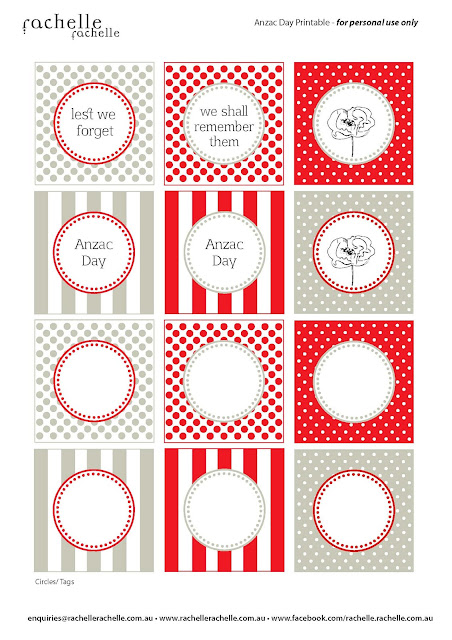 Posted by Rachelle Rachelle at 11:57 AM No comments: Links to this post 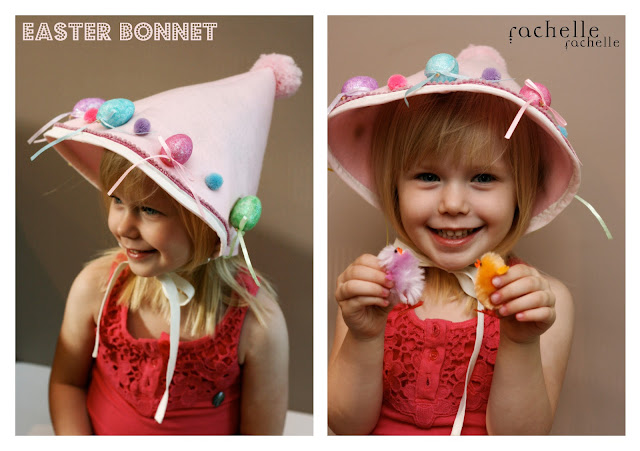 I chose to make mine with felt but the original idea was to make it with cardboard. So if you are after a no sew project use cardboard or if you are familiar with a sewing machine use felt.

What you will need:

STEP 1
Download the Easter Bonnet Template and print and cut out. Make sure you print actual size with no scaling and measure the test square to make sure it is 1 inch. 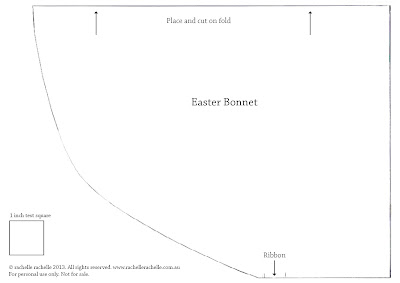 STEP 2
Place template on fold of felt. If you are using cardboard I'd print 2 templates and tape them together then trace around and cut instead of folding the cardboard so you don't have a crease line in the cardboard. I opted to use 2 felt squares as I had it on hand at home instead of cutting a piece of felt on the fold on the fold. You will just need to sew up the top and back edge if you do this. I'd also suggest going with the bias tape around the entire front rim otherwise you will have a dip in the middle of the rim. The bias tape gets rid of this. 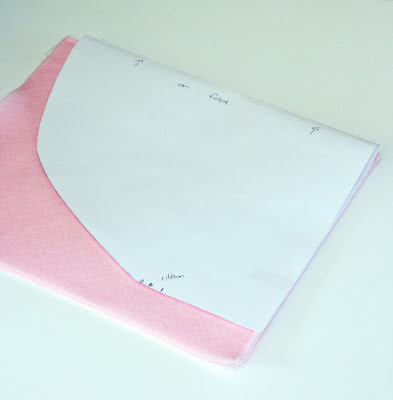 STEP 3
Sew or stick the back edge of the bonnet together (as shown) with sticky tape. Then add ribbon or bias tape as indicated on the pattern. I chose to run my bias tape along the front rim of the bonnet all the way around with around 30-40cm extra on each side to create the ties. I also snuck in some pom pom trim under the bias before I stitched it down. Get creative and see what you could do. Ric Rac could also look cute on it. 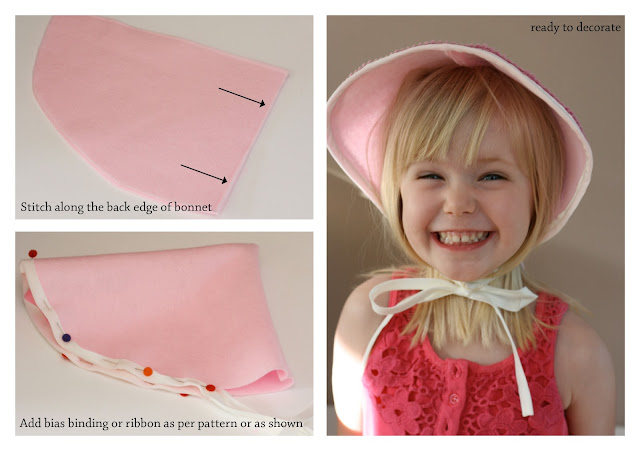 STEP 4
Get out your easter craft supplies and glue to your hearts content. Get the kids to help, they'll love it. I used the trusted old hot glue gun. You can pick one up for about $20 at most craft stores like Spotlight, Lincraft or Riot. The easter goodies I used were glitter eggs that I cut the sticks off, yarn pom poms, bias binding and pom pom trim. All these you can pick up from the discount stores for a few dollars. The trims I actually picked up from Riot for less than $1. Bargain. 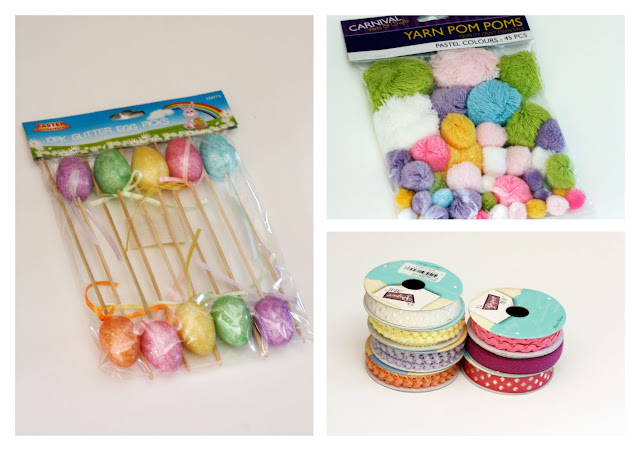 And that's it you're done. Give to your little girl to wear with pride at her Easter Hat parade.

Posted by rachelle rachelle at 11:42 PM No comments: Links to this post

If you love a good party like I do then you will know how excited I got when a friend asked me to make her son's baptism cake. I don't love the whole baking part so much as I find it so stressful, (I'd never make a good baker. Lol). But I love decorating. So instead of just doing the cake I asked if I could do a dessert buffet complete with handmade decorations.

The party decorations were made from paint swatches that you can grab from a paint or hardware store, pom pom trim and fabric. The kids frame art, name bunting, and circle bunting were all made from the paint swatches. I did a tutorial for Shop Contemporary Handmade on Friday on how I created the Paint Swatch Kids Art.

The cake was a blue ombre layered cake with a handmade banner on top and I used fabric and pom pom trim to decorate the milk bottles and cookie jar. The cake was my starting point and the inspiration behind the whole dessert table and decorations. Paint swatch decorations are quick, simple and super easy.

It was only a small family occasion so I didn't want to go over the top with treats so I opted to do a 4ft dessert table with just a few tasty treats. I made the cupcakes and caramel tarts and bought the rest from the bakery section at Coles.  Everyone loves a good dessert buffet. Hmmmmm. 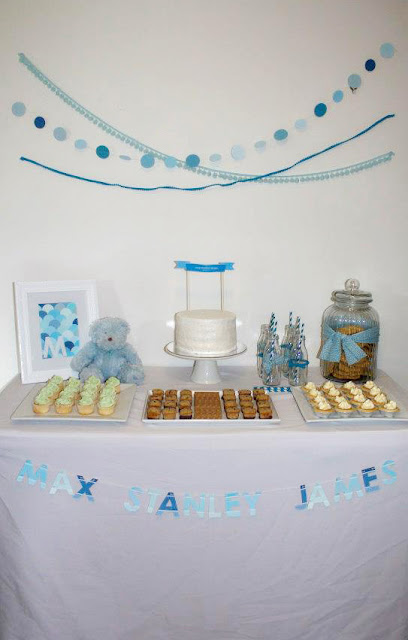 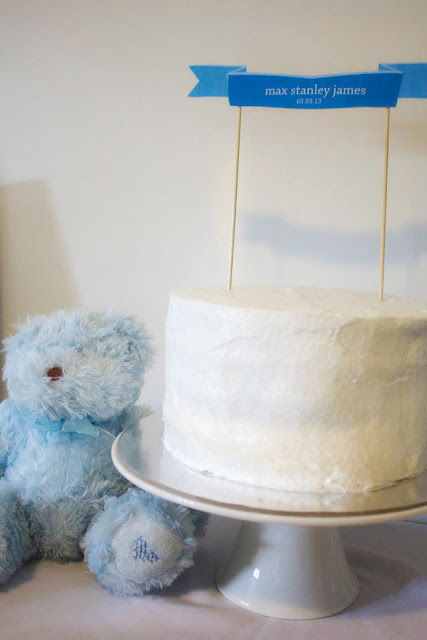 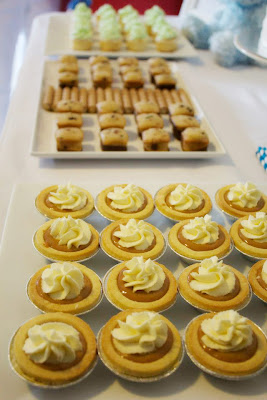 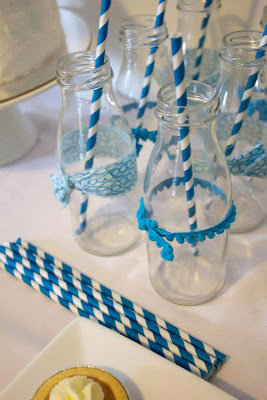 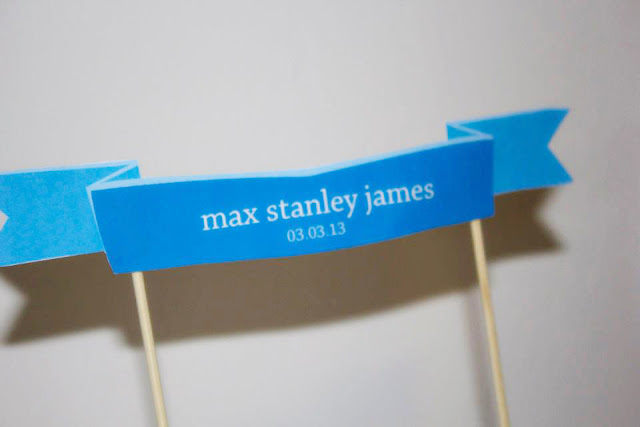 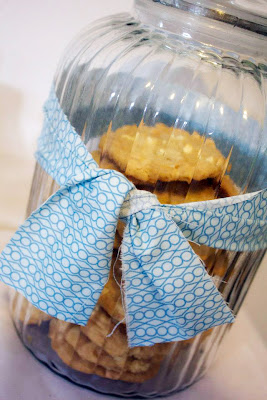 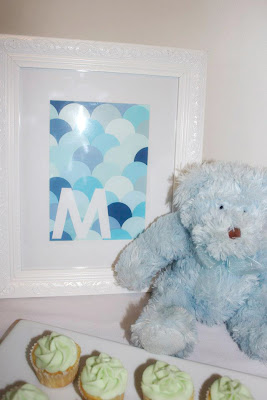 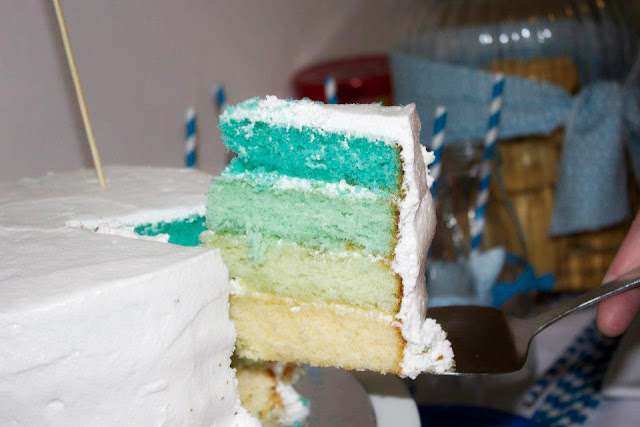 Posted by rachelle rachelle at 5:48 PM No comments: Links to this post 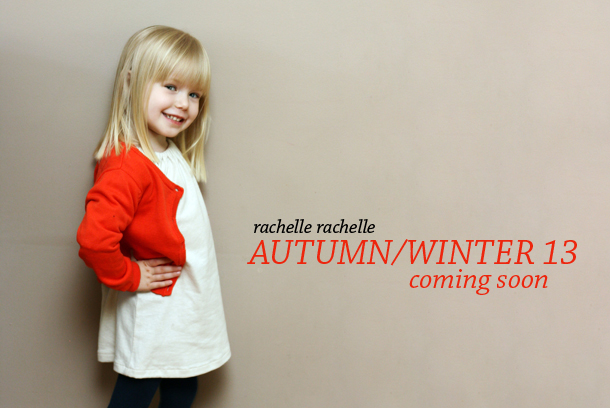 Make sure you sign up to our newsletter to be the first in the know for our latest releases, offers and special promotions.

Posted by rachelle rachelle at 2:09 PM No comments:

So it's February already. Wow, where did last month go? Some of you may know I have been getting my health and fitness back in order, and have totally transformed my life and lifestyle. With my new healthy living comes a thirst for healthy options. I'm gluten and dairy intolerant among other things so I am constantly searching for options to suit my allergies and intolerances.

So with Valentine's Day just around the corner I set out in the search for healthy options that the kid's can use for friends this Valentine's Day, and that I can use for hubby. The internet and pinterest are a great source of inspiration, and a great time waster. So here is my healthy take on Valentine's Day treats with a free printable to share with your own Valentine. You can download it here. 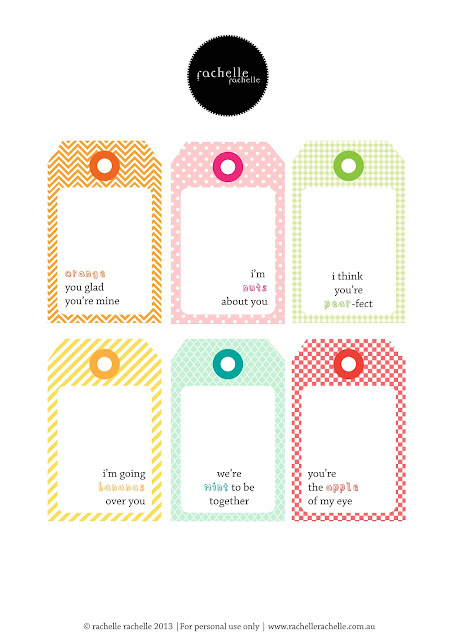 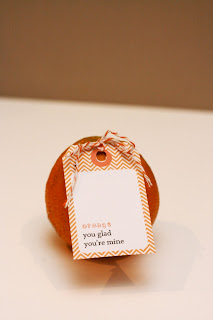 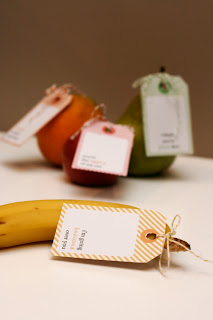 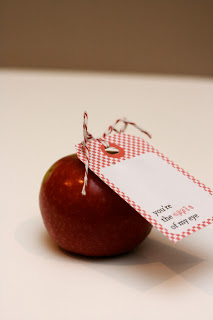 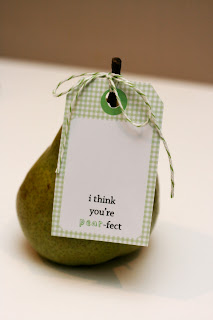 
Posted by Rachelle Rachelle at 11:03 AM No comments: Links to this post

So I recently did a quick rainbow party printable for a friend for her daughters combined rainbow birthday party. It was a very last minute thing that I whipped up before I went away for the weekend to celebrate my sister's 40th birthday.

Rainbow parties seem to be all the rage this year so I thought I'd expand on what I did and share it with you all. So here it is. Click on the link, download and enjoy!!! 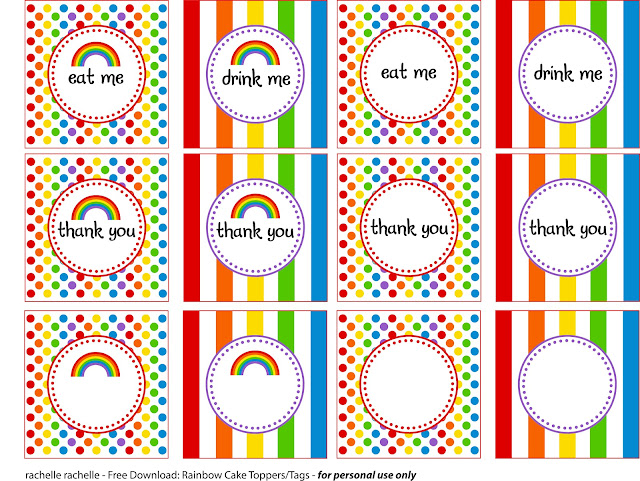 Posted by rachelle rachelle at 12:45 AM 2 comments: Links to this post


Tools and Materials
You can pick up most of the craft supplies from your local craft stores.

Some of my favourite party decorations at the moment are cupcake toppers. They are so cute and you can be personalised for any occasion. You don’t need to be a scrapbooker or a crafty type to make these. With a few simple tools you will have your gorgeous cupcake toppers done in no time.

Step 1:
Visit your local craft store and pick up a couple of craft punches, they come in all sorts of shapes and sizes and you can use any shape you like. While you are there check out their range of scrapbooking paper and card and get colours to match your theme along with some double sided tape. I have only used circle and scallops punches, but you can use any punch you like for this project. 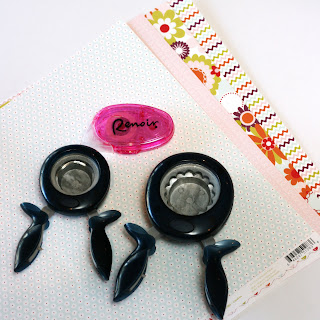 Step 2:
Take your scrapbooking paper and cut out your scalloped circles with the large punch, I used 4 different papers in coordinating colours. Punch out as many as you would like to make. 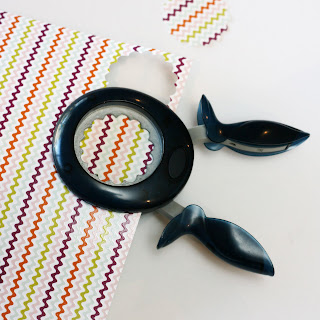 Step 3:
For your smaller punch you want to create 1.5” circles (or what ever size your smaller punch is) in a document of your choice, place the wording or pictures you would like to use inside the circle and print with the circle outlined so you can easily see to cut them out with your punch. I like the upside down punches so you can see what you are cutting out. To make it easier for you, you can download the template I have used at http://www.scribd.com/doc/59727418. I have left some of the circles blank so you can personalise them yourself. 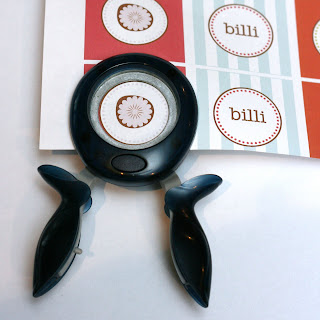 Step 4
Grab your double sided tape and stick the scalloped circle and round circles together making sure they are centered. 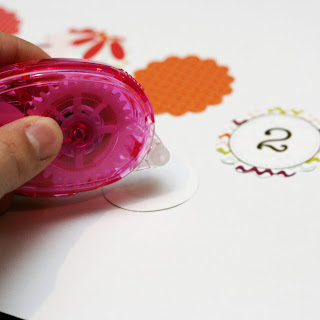 Step 5
Now glue or sticky tape the lollipop sticks to the back of the circles. 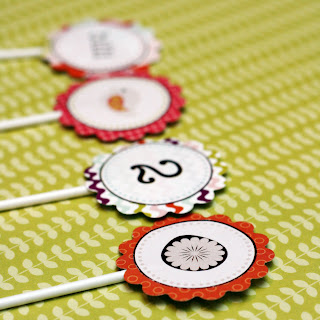 Step 6
Your cupcake toppers are now ready to be embellished or pop straight in to your cupcakes and enjoy. 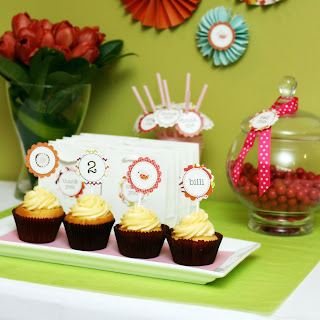 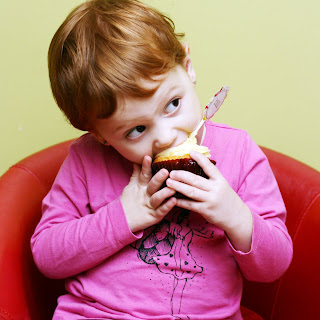 Here are some other examples, of how else you can use your punches

Note: Remember that the cupcake toppers are NOT toys and should be monitored around small children.

Posted by rachelle rachelle at 11:22 AM No comments: Links to this post